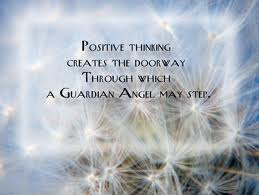 I love the thought that positive thinking can create a doorway for my guardian angle to step through.  Did you know there are health benefits of positive thinking?  Below are some of these benefits.﻿

The health benefits of positive thinking

Researchers continue to explore the effects of positive thinking and optimism on health. Health benefits that positive thinking may provide include:
The following story illustrates how this power works:
Allan applied for a new job, but as his self-esteem was low, and he considered himself as a failure and unworthy of success, he was sure that he was not going to get the job. He had a negative attitude towards himself, and believed that the other applicants were better and more qualified than him. Allan manifested this attitude, due to his negative past experiences with job interviews.
His mind was filled with negative thoughts and fears concerning the job for the whole week before the job interview. He was sure he would be rejected. On the day of the interview he got up late, and to his horror he discovered that the shirt he had planned to wear was dirty, and the other one needed ironing. As it was already too late, he went out wearing a shirt full of wrinkles.
During the interview he was tense, displayed a negative attitude, worried about his shirt, and felt hungry because he did not have enough time to eat breakfast. All this distracted his mind and made it difficult for him to focus on the interview. His overall behavior made a bad impression, and consequently he materialized his fear and did not get the job.
Jim applied for the same job too, but approached the matter in a different way. He was sure that he was going to get the job. During the week preceding the interview he often visualized himself making a good impression and getting the job.
In the evening before the interview he prepared the clothes he was going to wear, and went to sleep a little earlier. On day of the interview he woke up earlier than usual, and had ample time to eat breakfast, and then to arrive to the interview before the scheduled time.
He got the job because he made a good impression. He had also of course, the proper qualifications for the job, but so had Allan.
What do we learn from these two stories? Is there any magic employed here? No, it is all natural. When the attitude is positive we entertain pleasant feelings and constructive images, and see in our mind's eye what we really want to happen. This brings brightness to the eyes, more energy and happiness. The whole being broadcasts good will, happiness and success. Even the health is affected in a beneficial way. We walk tall and the voice is more powerful. Our body language shows the way you feel inside.
Posted by Gladys Leavitt at 8:28 PM