My 2nd oldest grandson and granchild, Justin Leavitt, received his mission call for the Church of Jesus of Latter Day Saints. He is going to the England Leeds Mission. He reports to the Missionary Training Center in England on April 18th.

As everyone entered our home to hear him read his call they were given the opportunity to mark where they thought he might go on a map that was posted on a wall in our entrance way. It was cute the way his parents set the map up.  Everyone was give a little flag to mark their guess.  This picture was taken a couple of days after so all the flags are removed and the little "Justin missionary" was placed above England. 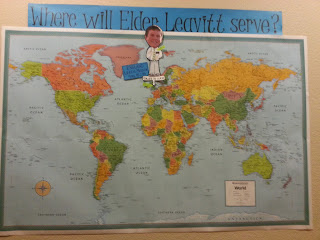 This picture is of everyone waiting around for Justin to open his call. We probably had about 40 to 45 people at our house to witness the opening. 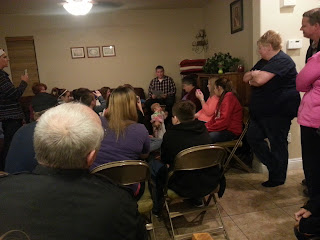 This next picture is right after reading the call.  His mother was overjoyed as you can see by the picture of her and others clapping their hands.  I feel the spirit testified to everyone in our home that this call came from the Lord. If you haven't guessed by now, this is a big deal to us.﻿ 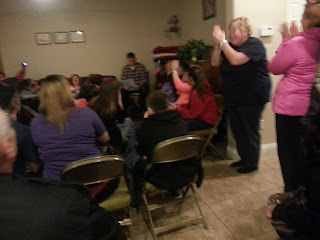 We are so proud of Justin's decision to serve on this mission for 24 months.  For those who might read this and are not familiar with the Church of Jesus Christ of Latter Day Saints, most young men and some young women choose to go on missions for the church when they reach a certain age.  Young men can go at 18 and young women can go at 19.  This just recently changed since October of 2012. The age for young men used to be 19 and young women 21. The age change was announced in the General Conference of the Church.  There are 2 general sessions on Saturday and 1 Priesthood session.  Then on Sunday there are 2 more general sessions.  The announcement was made in the 1st session on Saturday October 6, 2012.

There's a lot of preparation involved even before the call comes.  Some preparations include going to the dentist and sometimes having your wisdom teeth removed.  Justin was one of the lucky ones to have his wisdom teeth out.  Another thing they have to do is get a physical.  And there's a lot of  "paperwork" to fill out.  Mainly everything that is submitted is submitted via the internet.

I read on the internet that just two weeks after President Thomas S. Monson, President and Prophet of the Church of Jesus Christ of Latter Day Saints, announced the change in age, Church headquarters saw an increase in applications go from an average of 700 per week to 4,000 per week.  Can you imagine how busy headquarters must be processing all these applications?

These young men and women choose to spend two years of their lives preaching and teaching the gospel of Jesus Christ to those who are ready and willing to listen.  I will be anxious to see how the church membership increases over the next couple of years because of all these missionaries going out now.


Justin has always been the strong, silent type. He carries a strong spirit with him.  He gave a talk a couple of weeks ago in church.  You can tell he has a strong testimony.  He is so anxious to get busy with the work.  He has a lot to do before April 18th. He has to get a visa, passport, clothes and so many other things need to be done.  It's a little overwhelming.

I know that he will do a great job and have great experiences in that great country. He also has a lot of ancestors that come from England on both sides of the family. And they have a beautiful temple in Preston which is close to the MTC.

I'm so grateful for this great and wonderful church I belong too.  And I am grateful for my family, for the choices they are making.﻿

Posted by Gladys Leavitt at 7:47 PM